DemoBlog and I have had a good run. Well, not really, I hardly ever wrote here. Which is why I am beginning a new blog - ZapBoom - and abandoning dear old DemoBlog forever. ZapBoom will have a more natural style, though it will talk about the same political/technological concerns. My goal is to write a post every day, so you might even have a reason to come by and check it out at http://zapboom.bligoo.com/

BTW: You may notice that it is on a very cool new social blogging platform called Bligoo, which was developed by my boyfriend. Create an account for yourself and become part of the family.

I won't be able to attend the Nonprofit Technology Conference next week in DC as I will be in Nigeria working on a consulting job for the OpenNet Initiative. Nevertheless, I'll be presenting my article "Leapfrogging Borders: Social Change Technology in the Global South and its Implications for American NTAPs" at the conference via video. Here it is, five minutes of fun for your viewing pleasure. ;)


The URL for the video is http://www.youtube.com/watch?v=OxxgpEj0UIM

Think Digg: How NGOs Can Read Their Members' Minds

Whether by periodic polling of members or by making the decision internally based on the group's stated priorities, NGOs today do not have effective means of continuously monitoring the policy priorities of their members. This is not because a tool does not exist, but rather because that tool has not been adapted to a social change purpose.

The tool is Digg, a website that allows its members to vote ("digg") news articles, pushing popular pieces up to the top of the homepage. In this way, Digg democratically ranks its articles according to member interest:

While Digg proports to tell what news is cool, what it is really reporting on is what it's members think is cool. The ability of democratic ranking sites like Digg to take the pulse of a group of users could be put to use by social change organizations. Instead of voting on what news is cool, members could vote on what public policy issues are important to them.

For example, let's say Greenpeace wants to create a citizen lobbying campaign wherein it will ask its members to send personalized e-mails to the US Congress in order to encourage the US to take a stronger stand on fighting global warming. What should the content of the campaign be? Asking for a resolution that recognizes the the effects of global warming or a specific proposition to address the problem, like subsidizing research into alternative fuels or joining the Kyoto Protocol? What type of anti-global warming campaign is most likely to resonate with members?

This is where a Digg-like web feature could be very useful. Greenpeace would check its democratic ranking site (which would be located on the Greenpeace website) and see what types of environmental news stories its members had been voting on. If, for example, stories about subsidizing alternative fuels ranked high on the list, this might encourage Greenpeace staff to choose an alternative fuel campaign.

This is not to imply that an organization's lobbying should always be decided by referendum. In many cases, staff are more informed about the success factors for a lobbying campaign than are members. Democratic ranking sites should not determine lobbying campaigns, but rather aid in campaign decision making by revealing the priorities of members.

Digg-like polling will not work for every lobbying group. It would be a poor choice for the AARP, because most of its members are not active internet users (though this is likely to change as the Boomers age). Demogratic ranking sites would be most effective for social change organizations whose members are used to interacting with the organization online (MoveOn, Avaaz) or whose members are part of the internet generation (Greenpeace).

Democratic ranking sites presents interesting opportunities for social change organizations to better engage with their members. I hope some of these organizations decide to test the technology's potential.

The Gates research project officially ended at the end of January. My project manager, Ricken, submitted it to the Gates Foundation last week and now I am just waiting for official permission to distribute the final report to the people I interviewed during the research process. Hopefully, the report will become public domain, in which case I will also post it on my website.

The day I finished the Gates report I received an e-mail saying that the abstract I submitted for my article,"Leapfrogging Borders: Social Change Technology in the Global South and its Implications for American NTAPs" was accepted to run in the new Journal of IT in Social Change. So I spent last week fleshing out the abstract into a full article. In addition to appearing in the journal, I am get to be part of a panel of authors at NTEN's Nonprofit Technology Conference in Washington in April. That should be fun.

This weekend Paolo and I are visiting friends in Santa Cruz, a tourist-friendly wine region near Santiago. It will be nice to take a vacation after all this writing!

It appears that national internet/cell phone penetration rates are not particularly important in determining whether an e-advocacy campaign will be successful within a particular population.

-Filipino President Joseph Estrada was deposed by students using SMS to organize rallies in a "coup de text" when the national cell phone penetration rate was only 15%.

-The Jessica Lall protests occurred in India when national cell phone penetration was only 7%.

I've received a couple of queries as to where in the work process we are. In answer to those questions, we are in the finishing-it-up-an-turning-it-in phase. We will be submitting the report to the Gates Foundation at the end of this month.

I am a member of Save Darfur and I am frustrated that few Americans are concerned about the crisis there. I think this is principally due to ignorance. To Americans, Darfur is a buzzword, a distant sound bite, an iconic tragedy, that is not fully real. How can you understand the lives of a group of people if you only see them for 30 seconds a day serving as a backdrop for a news anchor's "special report"? 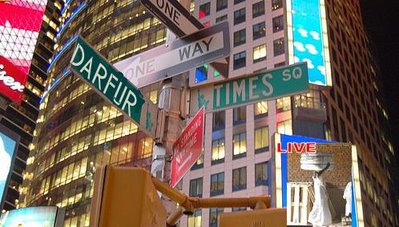 Put a video screen in Time Square that shows Darfuris simple living their daily lives. At every moment Americans will know what is happening in Darfur. Put an equivalent screen in Darfur. Consider adding voice, even though language would be a problem, so that people can speak to each other and the project does not become voyeuristic.

Let the link develop a life of its own. Maybe people will be angry, or curious, or suspicious. Who knows? But it will mark a new phase in how we see human tragedies, not filtered through the media but directly human-to-human. The results could be amazing.